2017 will be a year full of challenges. Besides marathons and half marathons, I will also do an Ironman 70.3 (half the distance of an Ironman), start learning Arabic and maybe do a metric century bike ride.

I also plan to do the 9+1 with NYRR* to earn an entry into the 2018 NYC Marathon (which will be on my 28th birthday as well). I get bored easily, thus the biggest challenge for me in the NYRR races is to do loops in Central Park. I can’t loop anything more than once; in the second loop I slow down, lose motivation, and want to drop out. So I will mainly do the 4mile and 5K races that don’t require me to loop.

It was miserable to be standing in the freezing wind in shorts and tank top (under a trash bag) for 2 hours before the race. My fingers were numb even after crossing the finish line. After I finish, I didn’t wait to engrave the medal; I was so traumatized by the cold that I went straight back to the hotel and hid under the blanket sipping turmeric tea for a full hour before coming out to get food. I also had a fever for a few days after the race from the freezing wind.

Does it worth it? Yeah, of course, everyone needs to do a Disney Marathon in their lifetime.

Running three loops of anything is more of a mental than a physical challenge. It was unusually warm that day. I enjoyed running in Prospect Park, though this is probably my only time running this race. I simply can’t loop things.

It’s a half marathon in Wilmington, DE. This race benefits the American Lung Association, and Wilmington is less than three hours away, so I’m in! I drove through Wilmington a dozen times and finally stopped here to check out the town.

There were too many cyclists at the bike tour. I think it definitely worth it to do it for the first time, but afterwards, this should be a escape NYC road trip kind of weekend.

This will be the most challenging race I ever run. Back in 2015 this guy did a mountain biking race on the same course, and here’s the map. The course has a total 750 meter elevation gain, which is roughly 2460 ft., similar to that of North Face Endurance Challenge at Bear Mountain. I almost never run trail, and it’s absolutely crazy to run this after an Ironman 70.3 and more than 13 hours on a plane. But it’s in my hometown, and I simply cannot pass it.

This past August I visited CDMX for the first time and cheered the “I” edition of this Marathon, and became friends with some Mexican marathoners. In 2017 we’ll run the “C” edition together.

I went to college in Upstate New York. This marathon is my homecoming.

I want to do a marathon in November because it’s my birthday month.

In between 25 and 26, I became a serious runner and spoke fluent Spanish. I started running in 2015; I was merely bored with my life and decided to see if I have the capacity to do something I always hated, which is running. Then something happened and changed everything. In December 2015 I ran my first half marathon. I signed up for it because everyone I knew on Facebook seemed to have ran a half, and I wanted that as a milestone. Instead during the course of my training, I became the person who studies training plans and discusses them endlessly with friends and even strangers behind water fountains. The night I finished my first half, I signed up for a marathon. Then in the next few months, I signed up another two marathons. Running went from something I occasionally do to who I am.

Spanish is something I always wanted to learn, but never had the resource or time, until I moved to New York City two years ago. I went to the first class at Instituto Cervantes and just kept going. In August I traveled to Mexico City alone and suddenly found that I could understand almost everything. I also went on Spanish speaking day trips with Peruvian and Colombian tourists, went to cheer the Mexico City marathon and made friends with fellow Mexican marathoners, and we were planning to run the Rock’n’Roll half marathon together in Mexico City next March.

I’m a good student and I worked hard: I hardly missed any classes and I always do the homework and the required reading; I took a lot of notes and on Friday nights I would study them instead of going out. The classes were expensive at $580 per course, and that’s about 30 hours of class time. But it was all worth it.

It is this year that I became a new person again, the person not quite who I want to be, but much closer to the goal. I reinvented myself into a runner and a Spanish speaker. I had to, because the person I had been would never have been capable of. In the next year I will probably focus on getting better: run faster and learn to understand more Spanish dialect. And the person in 10 years will again be completely different from who I am now.

Since I started running in May 2015, I want to complete at least one Half Marathon* in each State, plus D.C. and Puerto Rico, before I move out of the U.S. to another country. Here’s what I have sign up so far for 2016.**

The day I ran my first half marathon of the year started with light rain. It was sunny that same afternoon, but between 9am and 11am during the race, it was heavy rain. Of course I was drenched as I’m always under prepared for any travels, and ended up having a fever and lying in bed for the next two days and missed my training run and Spanish class, I found the race experience with Trimara Sports pleasant.

I woke up at 5am, and spent 2 hours on trains and buses to get to Staten Island, but I had a good time. Now I’m considering signing up the Holiday Half Marathon at the end of this year with Trimara Sports as well. 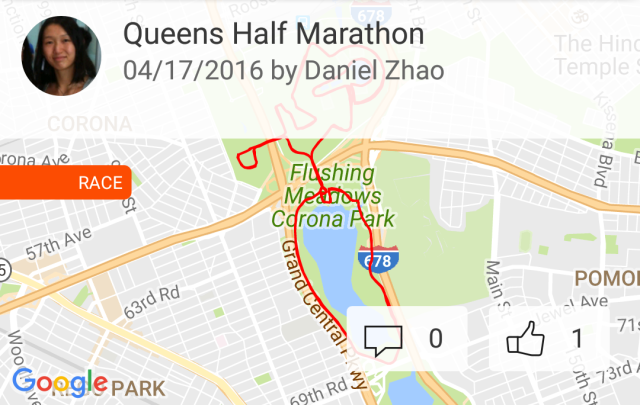 It’s a half marathon in my neighborhood, of course I’m doing it. I really enjoyed running with NYCRUNS, they have put up a good race, with lots of post race bagels and fruits. And I couldn’t believe there were more than 1,000 people came out to run on a Sunday with limited 7 train service.

This is my first marathon and my goal is simple: to cross the finish line in upright position. I have been training for the KDF Marathon since January and if I don’t collapse during running, I hope to finish within 4 hours and 15 minutes. 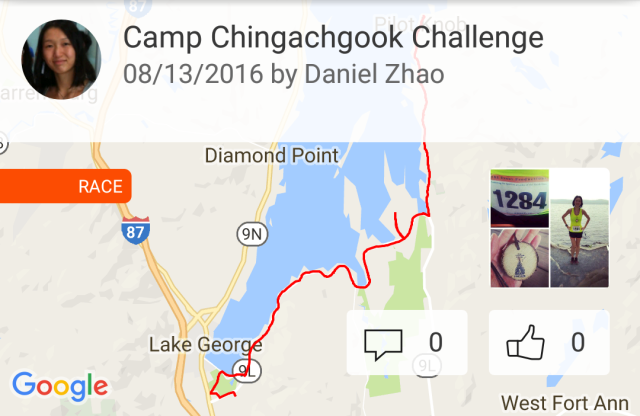 This course is beautiful but hilly, and the weather was hot. But then I get to swim in the lake and enjoy the best post race food! I always loved Lake George, back in my college days, my boyfriend and I used to spend long weekends here, relaxing and shopping at the outlet malls. It felt great to be back. 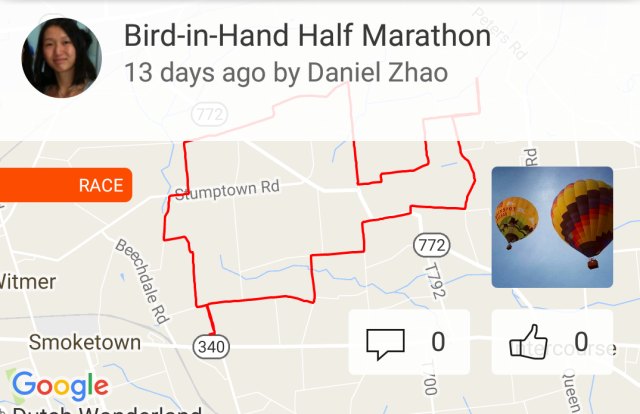 I love almost everything Amish, so when I found out that the finisher’s medal has a horseshoe and the race course runs along the farmlands of Lancaster, I signed up right away. Everyone who knows me well knows that I travel to Lancaster to spend weekends several times a year. Maybe this will be the start of a new tradition, running Bird-in-Hand Half and then refueling with Smorgasbord.

This ended up being my first DNS (did not start) race. On the Thursday night before the race, as I was walking through a door, it closed while I was crossing the threshold and hit my right ankle hard. I was immobile for Friday, Saturday and Sunday. I was really upset so ended up eating the entire bag of oreo cookies in Saturday afternoon.

I lived in Brooklyn for a year before moving to Queens my current apartment. I would love to do a half marathon running through Prospect Park.

Really happy to be able to run again. The RW Half & Festival is a great event, they even provided shuttles for us who live in NYC. The weather at the start was cold, but then it warmed up after I finish. The course was hilly but beautiful. I would like to come back and do their Grand Slam someday.

They say money can’t buy happiness, but when I received an email from my bank that my card had been charged $140 (means I won the lottery to enter MCM), I was in fact quite happy, almost ecstatic to be honest. When I told people I will run the MCM, almost everyone told me I’d have a great time and the race is really beginner friendly. I can’t wait :) 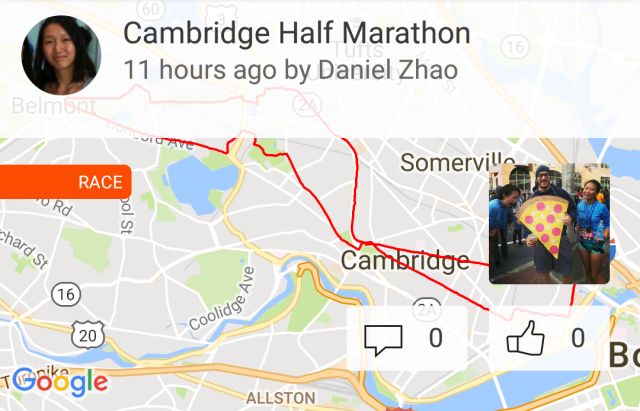 My running buddy wanted to do this race because she went to school in Boston years ago, and I’m simply tag along. Why not :)

I know I need a longer run.

During my first half marathon, the Illuminations Half in San Antonio, Texas, I hated myself during the first 7 miles, and really enjoyed the last 6 miles, and by the time I finished, I’d love to run more, so I signed up a marathon the same night after I got back to hotel.

(I really don’t speak much Spanish, that’s why I’m still learning, taking Spanish classes twice a week at Instituto Cervantes. This post is not intended to serve as running resource or Spanish example, and I’m sure I’ve made tons of grammar and word choice mistakes in it. If you are also a novice runner or trying to learn Spanish, just work hard and have fun!)